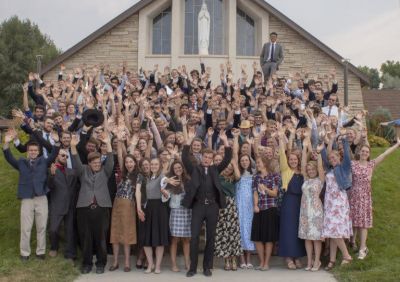 The 2018-2019 School Year at Wyoming Catholic College officially began on August 28th, 2019 (July 31st for incoming freshmen of the Class of 2022) and ended with the graduation of the Class of 2019 on May 11, 2019. During the year the school had an average (pro-rated) enrollment of 182 students, welcomed three new professors as two departed, and remained headed for the entire time by Dr. Glenn Arbery and Dr. Virginia Arbery as president and co-president of the school respectively.

The school doubled the space it rented from the Inn at Lander in order to have two dormitories, St. Josemaria's for men and St. Gianna's for women. Men were on the second floor of a wing of the hotel and women on the first floor. With this change, St. Theresa's Dormitory, which had temporarily housed men under the name of St. Josemaria's, was converted back into a women's dorm.

Fr. Robert Frederick returned to his home diocese of Atlanta, Georgia with the beginning of the school year and was replaced with Fr. Paul Ward from the Archdiocese of Detroit.