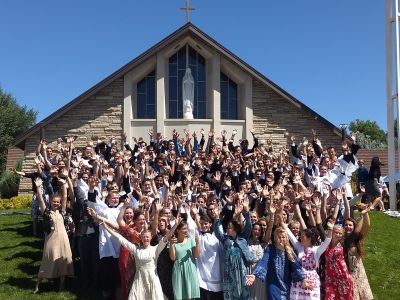 The 2019-2020 School Year at Wyoming Catholic College officially began on August 26th 2019 (July 30th for incoming freshmen of the Class of 2023) and ended with graduation of the Class of 2020 on May 25, 2020, which was one week later than originally planned. During the year the school had an average (pro-rated) enrollment of 184 students, welcomed one new professor as one departed, and remained headed for the entire time by Dr. Glenn Arbery and Dr. Virginia Arbery as president and co-president of the school respectively.

The year was severely disrupted by the outbreak of the Chinese coronavirus, leading to an unprecedented shutdown of classes in the spring semester and a failing attempt to run classes online for the last two months of the school year. Nevertheless, the school was able to host a graduation for the seniors of the Class of 2020, although it was held outdoors at the home of the Suzankas, rather than at its typical location, the Lander Community Center.

Card readers were installed during the year on most building entrances across the school's campus along with every student being assigned a uniquely coded key-card, replacing an older and less secure punch code security system, although at a price in the tens of thousands of dollars to install and maintain.

Somewhat unprecedentedly, the school temporarily and partially suspended its "No Cell Phones" policy during the fall semester when issues with the school's landline phone service provider made it more difficult for many students to contact their families at home.

Portions of the Inn at Lander rented by the school as dormitories during previous years were replaced in 2019 with portions of the Dillon Vista Apartments. St. Scholastica Dormitory was also converted from housing women to housing men in order to balance out dorm capacity versus demand.