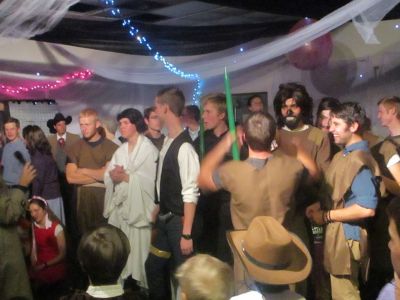 Juniors dressed as Jedi at the 2019 Sophomore Dance

The 2019 Sophomore Dance of the 2019 Halloween Dance at Wyoming Catholic College was put on by the Class of 2022 on November 1, 2019. With a theme "Sci-Fi", entertainment coordinated by Andrew Russell, food by Ruth Kress, decorations headed by Emily Gecosky MaryAnne Spiess and overall planning by Camille Callaway it featured a bar area st up like the Mos Eisely Cantina in Star Wars and a dancing floor decorated to look like a galaxy in space. 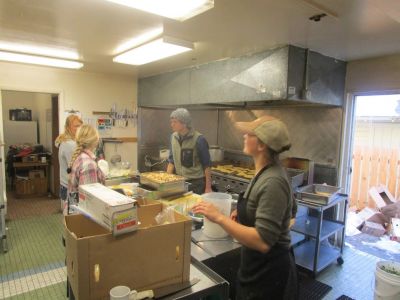 Just as in the class's previous dance, Ruth Kress headed food production Due to the Sci-Fi theme many items were made to look exotic and alien.

The main dining room of Frassati Hall was decorated as a galaxy with floating clouds and nebulae along with, in one corner, a cardboard representation of Dr. Who's "TARDIS" time machine. The long hallway of Frassati Hall was made to look like an airlock, while the lounge area was decorated as the Mos Eisley Cantina from Star Wars, complete with Imperial posters decorating the walls and Han Solo (Joseph Nemec) walking around in search of Princess Leia (Hanna Massell).

Entertainment was headed by Andrew Russell and included multiple skits, a tribute to departing Isabel Solis, and a special guest appearance by Dr. Thomas Zimmer within one of Andrew's skits. Anne Zelden closed the entertainment with a display of high-level tap dancing. Jacob Zepp judged a costume contest which featured many of the Class of 2021 appearing together as Jedi while Dr. Kent Lasnoski and his family were costumed as the characters from the movie Interstellar, among many other costumes.

It has been suggested that Thomas Aquinas College students stole the Class of 2022's dance theme idea, as, on the exact same night that WCC hosted their Halloween Dance, TAC hosted their own, also with a science fiction theme. Further adding to this theory is the fact that several TAC students and their friends, were, for some reason or another, present at the WCC dance itself.

See more photos at this link