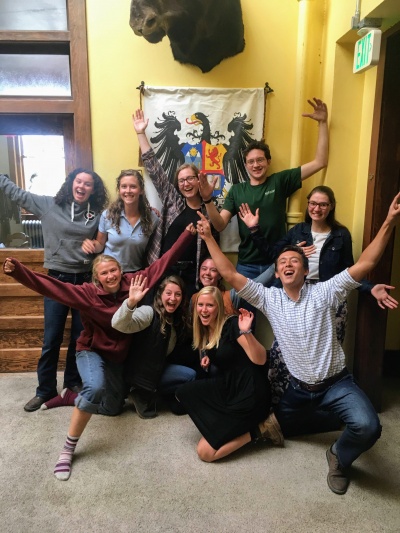 Students at the beginning of Spirit Week in October 2020

The 2020-2021 School Year at Wyoming Catholic College officially began on August 23rd 2019 (July 28th for incoming freshmen of the Class of 2024) and is projected to end with graduation of the Class of 2021 on May 24, 2021. The school year began with a record enrollment of 190 students, the welcoming of three new professors as several took leaves of absence and it remains headed by Dr. Glenn Arbery and Dr. Virginia Arbery as president and co-president of the school respectively.

Nearly setting a record for the earliest time in a given year in which they fully work, phones in dormitories began working fully by October of the year.

The Don Bosco Building acquired on a short-term lease by the college over the summer of 2020 joined the school's campus as a student lounge as well as housing both the Byzantine and Roman rite chapels for daily Mass, Divine Liturgy, and other services.

St. Benedict's Dormitory and St. Scholastica Dormitory switched names as St. Scholastica's reverted back to housing women amidst an increasing imbalance between men and women at the school and the record size of the Class of 2024 nearly maxing out the school's dorm capacity.