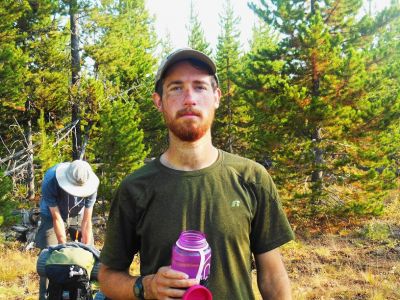 Andrew Russell, 22, is a senior at Wyoming Catholic College and one of the most famous students in the Class of 2022. Originally from Illinois, he is a comedian, and WFR at the school and formerly was a Math Tutor at WCC and ran IT networks for a Catholic book distribution company while participating in Speech and Debate. A member of the famous "Lost Boys of WCCLE 5", Andrew is common to be found near a whiteboard in the Baldwin Building, practicing songs to sing with friends, playing cards in the Pequod or making puns on the fly.

Andrew originally intended to join WCC in the Class of 2021, having heard about the school through his brother John Paul Russell and he to this end, attended the Founders' Scholarship Competition to that end in spring 2017. However for various reasons he had to wait and eventually would up in the Class of 2022.

Andrew is controversial as to what his style of humor actually consists in. Some say its comedy, others say its best described as narrative and logistical restructuring, and school leaders typically purport him to be a prime example of the "blended" style, as examples by his poem "To Lucasta Dying Young".

Theories about Andrew's background, identity, and essence have been around as long as he has been at the school. These vary from suggestions that he is a "Dr. Seuss character" to rumors that he may have met Bigfoot in the wilderness, or that he is the founder of a religion. His roommate his freshman year, Omnisciens, wrote this poem, that has been used by some as evidence for these otherwise unsubstantiated claims:

In the beginning were the lions. And Andrew was that the pride of lions was great upon the earth. So Andrew said "Let me make man, that the pride of lions may come before the fall. So man was made, and ripped throughout the earth. Then Andrew said "Let there be winged creatures, that they may not trip so often." So birds were made, who could use their wings to save themselves from tripping. Then, because birds still tripped, the feet of birds said: "Let us remove ourselves from this creatures that we may never trip again. Thus worms came into being, which dug and burrowed to explore the secret places of the earth. The birds in their fury, declared eternal war upon worms, and began getting up earlier and earlier to catch their foes. The worms, however, quickly discovered the divine attribute of sleeping in, and thus survived despite all the efforts of birds. After many years, many worms came together and said to each other: Let us form ourselves in a mighty pillar reaching to heaven, that we may return to Andrews from whom we came," The worms did as they had spokens, and Andrew wholly down and was glad. As a reward for their effort and devotion, Andrew granted the warms safety from birds and eternal rest by transforming them into the first tree. Thus was born the hierarchy of beings And Andrew looked down from heavens, and was pleased with the works he had done.