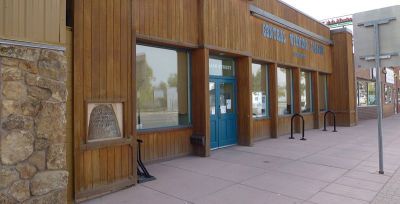 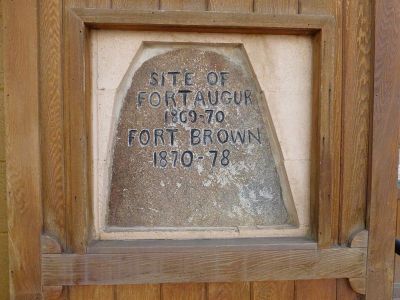 The current site of the Augur Building formerly housed Ft. Augur, which was establoshed in 1869 as a sub post of Ft. Bridger and mentioned in Owen Wister's book Lin McLean. It only lasted two years as a military installatiuon, helping to guard the then tiny frontier settlement of Lander as well as settlers in the Sweetwater Mining District against Indian raids. It was decommissioned in 1871, with its stationed troops being moved to Ft. Washakie about thirteen miles to the northwest.

Enclosed by a 175' by 125' wooden enclosure surrounded by a ditch the fort protected several log cabins with sod roofs that ultimately housed twenty-five soldiers, munitions, and other miscellaneous military supplies.

Turn of the Century

As Lander grew somewhat, but remained a small mining and ranching community, the location of Ft. Augur was used in various ways, as a corral, a homestead, and later as a blacksmith shop and reportedly several small shops near the turn of the twentieth century.

Little much happened with this plot of land until 1968 when Central Wyoming College was founded in Riverton and constructed a Lander classroom building on this site, the current building which they used semi-regularly through 2015.

Wyoming Catholic College began leasing the building in 2016 after Central Wyoming College moved their Lander center to a newly constructed building on the outskirts of town. They purchased the building in 2017, repainting it and performing some interior cosmetic modifications including the school's first and only drinking fountain.

The Augur Building is reportedly the best-smelling building on campus at WCC due to the intensive use of incense in the onsite Byzantine chapel. As Ryan Alexander, a WCC senior said last year, "Augur smells like a Byzantine liturgy and Baldwin like a pagan one."