The Baldwin Building is the primary classroom, administration, and library building for Wyoming Catholic College. It is located at the intersection of Main Street and 3rd Street in downtown Lander, Wyoming and is the oldest building in the town. 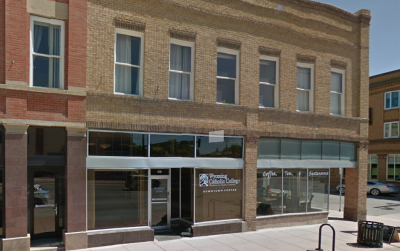 Constructed in 1887 by James Baldwin as an all-purpose trading center, general store, and supply building, the Baldwin Building became a central business hub of the then trading village of Lander. James Baldwin, a veteran of the Civil War, adventurer, treasure-hunter, and tradesman, had obtained a license to trade with the Shoshone people, and moving to Lander in 1885 originally used a log-cabin a few blocks east of the current location before an increase in business and profits led him to construct the first floor that year of the current building.

At this time there was a constant danger from Indian raids, so the building was constructed with metal protective doors that could be latched over the windows, peepholes for reconnaissance of the outside and an interior well and emergency storeroom to withstand potentially long sieges. 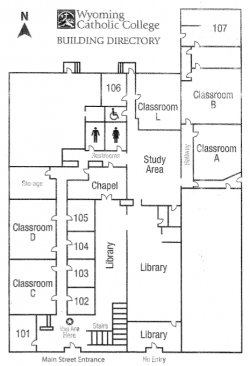 At present Wyoming Catholic College controls the whole of the Baldwin Building, though officially they report it is owned by an unrelated businessman. Five classrooms, school offices, a computer room, several rooms that serve as a college library and the college-owned Crux Coffee comprise their current known use of the building.

Due to the age and variety of uses the Baldwin Building has undergone, there are many conspiracy theories about it and its use from mere suggestions that there are secret rooms, to complex theories that the building hosts the leadership and control center for a world-wide spy ring.

Some have suggested that the basement of the Baldwin building connects to a hidden network of tunnels that lead to other locations throughout Lander.

James Baldwin, the original owner and builder of the eponymously named building, had attempted to recover a treasure of gold bullion from a ship sunk in the Pacific Ocean in 1881. Reportedly, he failed, but some have suggested that he did manage to recover most of the treasure, using some to build the Baldwin Building and hiding the rest somewhere within. Several groups of students at Wyoming Catholic College have attempted to search for the treasure based on these rumors, but yet to no avail. The school officially denies that there is any possibility of there being such a hidden treasure.