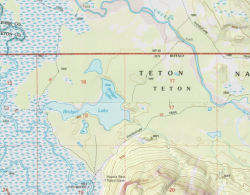 A map of the general area in which these events took place.

Bridger's Barbed Wire Bear Fence is a natural feature in the Teton Wilderness discovered and named by the WCCLE 5 of 2019.

The Deadlands and the Yellowstone Incursion[edit]

The WCCLE was instructed to camp on the northeast side of Bridger Lake, a lake just north of the Hawks Rest Patrol Cabin in the Teton Wilderness. Unfortunately, the lake was of course surrounded by trees. Further, the trail by which the WCCLE approached the lake was entirely on the same level of elevation as the lake. Therefore, even though the lake was fairly large, the WCCLE was unable to actually see it, and therefore could only make vague conjectures as to its location. 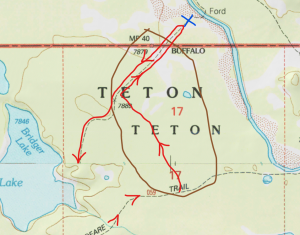 Red line follows a conjectured path of WCCLE 5 when they left the trail. Brown line outlines approximate area of the Deadlands. The horizontal red and dashed line is the border of Yellowstone, into which the WCCLE accidentally wandered, stopping for lunch and realizing their mistake at the spot marked with the blue X.

Further, there were no definite landmarks on the trail by which the WCCLE could determine when to leave it. When they did leave it, they didn't know whether the lake was to the north or to the west of their position. Accordingly, they spent a good long while traversing some of the most difficult terrain of the trip... in the wrong direction, as the map on the right shows.

They finally stumbled across a trail going perpendicular to their direction of travel. Still under the impression that the lake was to the north, they followed it in the wrong direction. Stopping to eat, for it was now about noon, they sent a scouting party ahead, which had gone no great distance before it came upon Thorofare Creek. The WCCLE quickly realized their true location. They also realized with keen interest that they were now in Yellowstone National Park. With keen interest, because they had been specifically instructed a few days earlier that they were not allowed to be there (something about permits). So they continued eating their lunch.

The rest of the day followed relatively uneventfully. Now aware of where they actually were, they simply followed the trail the other way and easily reached a suitable campsite. This being the WCCLE's first night on ISG, certain members of the group finally had leisure to catch a fish and eat it too, following the bear-avoidance protocol of cooking it a mile away from camp. Which, in hindsite, was almost certainly within one mile of the I-team's campsite. 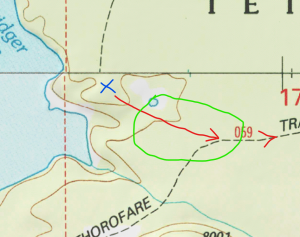 The blue X marks the location of WCCLE 5's camp, the red arrow is, again, theire conjectured route, and the green outlines the likely location of the bear fence. 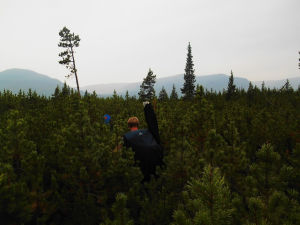 Photo of the area taken a year before.

The next morning, the WCCLE was enthusiastic about not having to return to the trail via the route they had left it by. Instead, they cut straight towards the closest point of the trail. Hardly had they gone a few yards, however, than they encountered an obstacle: saplings. Thousands of them. None were very tall, but tall enough to be above the WCCLE's heads. They were springy, and able to be pushed aside, but grew amazingly close to each other, such that it was impossible to see further than three or four yards ahead in most places. This was dubbed by the group "Bridger's Barbed Wire Bear Fence."