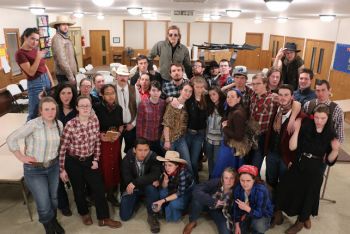 The Wyoming Catholic College Class of 2022 comprises forty full-time undergraduate students as of August 2020. They began their studies in August 2018 with fifty-five students representing twenty-two states and two Canadian provinces. The Class of 2022, according to an official school study, is the most studious of all of the classes at the school, studying ten hours more per week than any other class. In addition to this, the Class of 2022 holds an outsize influence on school administration, with 55% of supervisorial positions at the school held by its members, including a near-monopoly on control of food and maintenance. Their patron saint, decided by a contested 2018 vote, is St. John Paul II. 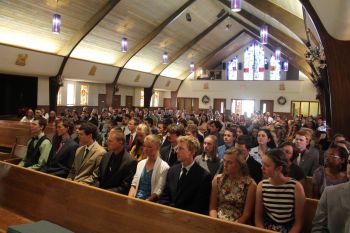 Balanced exactly between men and women, the class, after a strong start during the 2018-2019 school year, now holds the lowest dating rate of all classes at the school, a statistic still under investigation by school psychoanalysts as to its cause.

Their most famous members include Everett Polinski, Ruth Kress, and Andrew Russell.

Among classes at the school, the Class of 2022, has about the least idea of why they are there of any. No Milligans are among them, few siblings of older students at all, and they have a high number of so-called "one-offs", students who came to the school without knowing anyone else there. Because of this, some have declared that Acts 19:32 should be their motto: "Most of the people didn't even know why they had come together." It's true, many or even a simple majority of them, don't know why they're truly here or what they really are doing.

That's not to say that there aren't true devotees to the school curriculum. MaryAnne and Janelle wanted to come to WCC for years before finally joining the Class of 2022. Jacob Zepp was reportedly similar. Further, the studying rate of the class shows their devoted in at least some active way even if they habitually don't know.

Mik was the first to commit to join the Class of 2022, followed close after by Jacob Zepp, with most committals in spring 2020, near average, although there was a high late-committal body, with ten members making their final commitment within two weeks before classes were to start.

The Class of 2022 has hosted two dances so far, both of which were incredibly well received by the school community and are credited for having boosted the ante of entertainment standards at dances permamently.

After an extremely happy and energetic freshman year, where its members were known as "Freshmen Rockers", The Class of 2022 had one of the highest recorded rates of pseudo-depression during its sophomore year at WCC. Psychologists find it hard to explain them, theirbeahvior, and their mood, and mostly rest at admitting that they're one of the weirdest classes ever to come to the school.