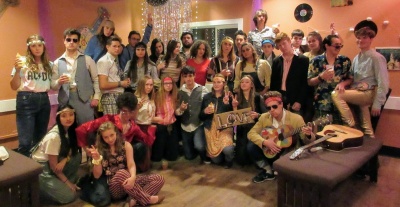 The Class of 2024 at Wyoming Catholic College (WCC) began their education at WCC on July 28th 2020 and will be going out into the backcountry wilderness on August 2nd for the Freshman Expedition. They began studies with 60 members and currently number 58, remaining an Absolutely Massive non-denumerable number that frightens many members of other classesfrom sheer quantity alone. Unless the unexpected happens, the Class of 2024 will also be the first class since 2014's not to have studied concurrently with Parker Eidle. The Class of 2024 was also originally set to bring WCC its furthest international students yet, Rachel Maina of Kenya and Mokhochane Thato of Lesotho although problems relating to acquiring visas will delay each of them a year . Through the Class of 2024 WCC also welcomed its third and fourth Canadians, Caitlin Duggan and Anthony Witzaney. Many, but not an abnormal amount of students in the class have siblings who have attended the school.

Making history, the school had to turn people away for the first time ever due to a lack of housing space to accommodate everyone interested in coming.