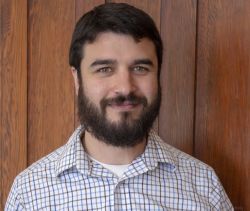 Colin McCarty is the Director of Student Life at Wyoming Catholic College and an avid horseman who has participated in the Horsemanship program at the school with students several times. Formerly he was the director of advancement for the school. He is also a close friend of junior Andrew Russell

After driving ambulances in Los Angeles, California and operating a nuclear warship in Norfolk, Virginia with the Navy, Colin was looking for a place to settle down and raise his three children with his wife Samantha. Colin spent the next four years in Gallup, New Mexico as an insurance adjuster and the Director of the Gallup Cultural Center, a project of the Southwest Indian Foundation. Realizing Gallup was not their true home, Colin and Samantha decided to settle their growing family of five children in Lander, Wyoming where they were married ten years earlier. Colin is proud to be part of Wyoming Catholic College and proud to live in Wyoming. He hopes to do all of the hunting and fishing he missed out on while living on the west coast.