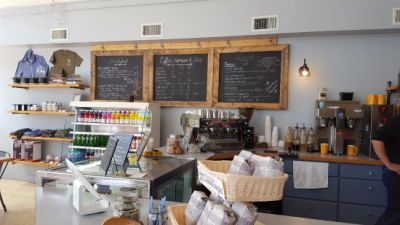 Crux Coffee is a coffee-shop, pastry-shop, and bar owned by Wyoming Catholic College and operated by its students. Founded in January 2015 and located now in the corner of the school's primary classroom building, the Baldwin Building, it serves "coffee, tea, and sustenance" according to its advertising. According to its official website its mission statement is "Everything in Excellence". Whether the shop is a charity on one hand or an active money-generating component of the school portfolio, however, is officially still under debate in the Lander community.

Crux opened in 2015, initially an temporarily within the school's Frassati Hall and only open to students and staff members. Later that year, however, the shop moved to in a corner space of the Baldwin Building and was made open to the public. Initially, a freestyle bouldering wall was installed and available for customers to practice their climbing on, illustrating the dual meaning of the shop's name (crux for cross and crux as the hardest part of a climb, an adventure, etc.). This wall was removed in 2018 to make room for additional dining space.

Some evenings, the coffee shop's space is made available for school events, like the famous Ruthie Toothie Concert in 2019.

In Fall 2019 Crux announced expanded evening hours on weekends known as "Crux After Hours" where the shop would temporarily become a bar (as IIT had predicted) serving "specialty cocktails, beers, and wines" according to the Crux announcement

Crux temporarily closed March-April 2020 due to the spread of the Chinese coronavirus whereby many of its student employees temporarily left town. It partially reopened May 1, 2020, however, and resumed normal operations by May 15.

Currently Crux's hours of operation are from 7AM to 5PM daily. Donuts, pastries, muffins and scones are backed fresh every morning for the shop and a variety of sandwiches, sides, cookies, and other snacks are offered in addition to the obvious coffee and tea.