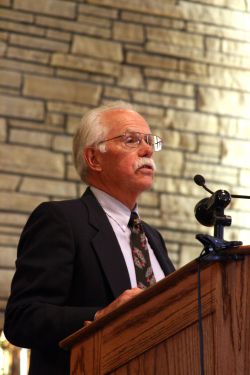 David S. Kellogg is the chariman of the Board of Directors of Wyoming Catholic College and a major local business leader in Lander, Wyoming.

David Kellogg resides in Lander with his wife, Carol, after having worked in several marketing and sales positions for computer technology companies IBM Corporation and Lexmark Corporation. He studied electrical engineering at Oregon State University in Corvallis, Oregon, as well as electronics technology at Central Oregon College in Bend. He and his wife own and operate DACON Enterprises, a private firm owning and managing real estate property (both commercial and residential) and a log-home building franchise. He is President of LEADER Corporation, a private local economic development organization, and is a member of the local Lions Club and Elks Club. He is also involved in many civic affairs, including the Cornerstone Committee, formed out of the LEADER Corporation, for the purpose of working to locate Wyoming Catholic College in Lander.

David also owns what many call the Kellogg Apartments, two buildings of which he rents to the school on a preferential basis as St. Benedict's and St. Scholastica's Dormitories.