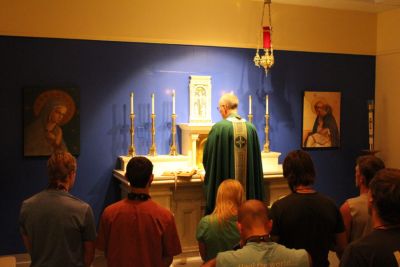 The Fr. DeSmet Chapel was located within Wyoming Catholic College's historic Baldwin Building on Main Street in Lander, Wyoming. Named after Fr. Pierre-Jean De Smet, a Flemish Catholic missionary priest who celebrated the first Mass in Wyoming in 1840. Originally the founders of WCC had considered naming the school after Fr. De Smet, but he is now remembered through this chapel located in the heart of the school's primary classroom building, and perfect for integrating moments of prayer into one's daily life.

Each afternoon during the week, there was adoration offered in the chapel from 1-5 pm and confessions from 4-5 pm (time sometimes vary). While there is a small sacristy, Mass was not usually offered in the De Smet chapel due to its small size but is either in the Don Bosco Building or in Holy Rosary Catholic Church.

The DeSmet chapel was replaced in January 2021 by a larger chapel located in the school's new Orchard Building located across Main Street from the Baldwin Building. Although the new chapel has not yet been named, it now hosts Mass during the week for the college and will soon again host adoration for the school, pending approval from the bishop.