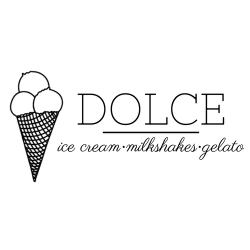 Dolce Ice Cream is an ice cream shop owned and operated by Wyoming Catholic College in Lander, Wyoming. Seasonally open from April through September, Dolce opened in 2019 and is located adjacent to Crux Coffee in an otherwise little-used sunroom in the frontage facing Main St. of the school's primary classroom building, the Baldwin Building. It offers hand-dipped and soft-serve ice cream, gelato, sundaes, and more. Dolce was first conceived of in late 2018 when it became clear that student and Lander-favorite ice cream shop, Ken & Betty's, was closing. School business officers led by Paul McCown purchased the companies' assets, furniture, and machinery, launching the school's own ice cream shop in April 2019 as an analogue to Crux Coffee in being a side business money-maker and cross-subsidizer for the college. 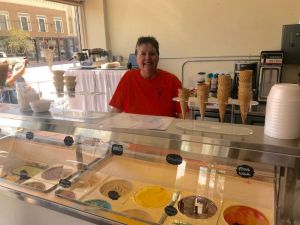 Dolce first opened in the school's front sunroom space in May 2019 with equipment sourced from ice-cream-shop Ken & Betty's, which had closed in Fall 2018. Dolce was the brainchild of school Chief Financial Officer Paul McCown who since his arrival in 2018 accelerated the school's side business program as part of a personal long term goal to have "total ownership and administration of the school over the town." A contest for naming the business was held amongst students with Dolce only narrow beating "Irkutsk Ice Cream" and "Glenn & Ginny's" by a tie-breaking vote cast by McCown. Only seasonally operated, Dolce remained open through the end of September, staffed mainly by students and the families of faculty and school staff members. Once closed for the season the room it occupied was converted back into a studying space.

Dolce reopened May 23, 2020 for the summer season in the same space and with the same menu offerings. It remains staffed by students, headed by Camille Callaway.