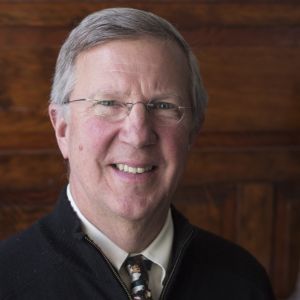 Dr. James Tonkowich is the Director of Distance Learning for Wyoming Catholic College and a former Protestant minister and businessman.

Jim’s work history includes business, youth ministry, pastoring a Presbyterian congregation, managing the daily radio commentary BreakPoint with Chuck Colson, leading the Institute on Religion & Democracy, a Washington think tank, and developing a variety of distance learning projects. His interests include studying and commenting on the intersection of religion and public life. He writes a regular column for The Stream and is the author of The Liberty Threat: The Attack on Religious Freedom in America Today from St. Benedict Press.

After becoming Catholic in the mid-2000s, Dr. Tonkowich began working for WCC for several years from his home near Washington, DC, but moved wife Dottie moved to Lander in the summer of 2016. When not working, Jim enjoys golf, fly-fishing, skiing, hiking, guitar, cooking, and life in Lander down the street from his four grandchildren.