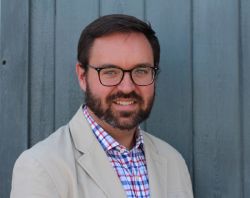 Dr. Jason Baxter is an associate professor of fine arts and humanities at Wyoming Catholic College and an expert in the works and writings of Dante.

Dr. Baxter, a graduate of the University of Dallas and the University of Notre Dame has has been with WCC since 2010. His primary research interests include medieval and Renaissance ideas of beauty, the long-lived legacy of the thought of Plato, and the poetry of Dante. He is also interested in medieval mysticism, humanism, and the relationship between the Middle Ages and the Renaissance. At WCC, Dr. Baxter teaches Greek, Roman, Medieval, and Renaissance humanities courses, as well as art history from antiquity through modernity. Dr. Baxter also teaches written rhetoric within the Trivium sequence and is responsible for designing Trivium 302:Junior Author Project.

His scholarly publications include articles on the Platonic tradition in the Latin West, and writings on Dante. Dr. Baxter worked with Wyoming Catholic College’s Distance Learning Program to produce a free, eighteen-part introduction to the Comedy: “Dante in the Year of Mercy,” and, more recently, a full online course on the “Medieval Mind of C.S. Lewis”. His A Beginner’s Guide to Dante’s “Divine Comedy,” which focuses on the spiritual meaning of Dante’s poetics, is available from Baker Academic. He has also published Falling Inward: Humanities in the Age of Technology, has made multiple media appearances, and frequently writes and speaks on his own experiences in travel, the relevance of the liberal arts, the relationship between humanistic studies and technology, and topics on Dante, for both popular and scholarly audiences.