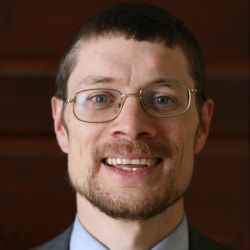 Dr. Jeremy Holmes is an associate professor of Theology at Wyoming Catholic College.

Dr. Holmes’ earliest religious memories are of a little Presbyterian Church in Lonoke, Arkansas. He didn’t know it, but his family was on a trek from church to church that would end in the Catholic Church. As a teenager, when he awoke to the reality of God and grace and his own desperate need of both, he absorbed his father’s love of Scripture. When he wasn’t practicing piano or rehearsing magic tricks, he pored over the Bible, scribbling endless notes in his paperback RSV. After earning a bachelor’s degree in liberal arts from Thomas Aquinas College, where he absorbed Catholic culture and met his wife, he set out to earn a doctoral degree in biblical studies. He lived for two years in a medieval Carthusian monastery in Austria, and then for seven years in a shabby apartment in Milwaukee, Wisconsin, and then for two years in the subtropical swamps of southwest Florida before finally finding his home in Lander, Wyoming. He enjoys introducing students to the enchanted realm of Scripture and to God and grace. Dr. Holmes and his wife homeschool their eight children including a child who is currently a junior at the school.

The Compendium Theologiae used in many Theology and Philosophy courses at WCC and usually attributed to St. Thomas Aquinas, has been rumored to have been written in whole or in part by Dr. Holmes.