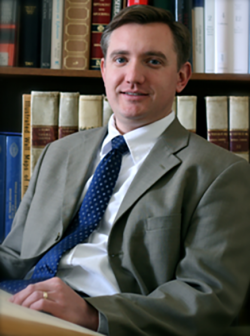 Dr. John Mortensen is a founding professor at Wyoming Catholic College, the founder and president of the Aquinas Institute and a 1997 graduate of Thomas Aquinas College. He is also a 2010 winner of the Vatican Prize of the Pontifical Academies and is Jacob Zepp's favorite professor.

An associate professor of theology and philosophy at Wyoming Catholic College, Dr. Mortensen was previously an assistant professor at the International Theological Institute in Gaming, Austria. For five years from 2002-2007, he taught philosophy and theology at the ITI, during which time he also served as director of finance and then as vice president of administration. He earned his doctorate in philosophy at the Pontifical University of the Holy Cross.

Dr. Mortensen was one of the founding professors of WCC in 2007 but left the school in 2016 to focus on his work at the Aquinas Institute. However, he returned in Summer 2020 to teach for the school's high school summer program PEAK and having moved back to Lander in the fall, will return to teach philosophy and theology in Spring 2021.

Prize of the Pontifical Academies

Dr. John Mortensen is one of only five scholars worldwide to have received the honor of the Prize of the Pontifical Academies, only two of which have come from North America, since His Holiness Pope John Paul II first introduced the award in 1997. At a January 27, 2010, conference of the Pontifical Academy of St. Thomas Aquinas and the Pontifical Theological Academy, His Eminence Tarcisio Cardinal Bertone, S.D.B., Secretary of the Vatican Secretariat of State, presented this prestigious award to Dr. Mortensen.

The following day, the Feast of St. Thomas Aquinas, His Holiness Pope Benedict XVI granted an audience to the Pontifical Academies in the Sala Clementina, which Dr. Mortensen and his family were invited to attend. After the Holy Father delivered an address about St. Thomas, he greeted the Mortensens and blessed their four children.

According to the Vatican, “the Prize of the Pontifical Academies is awarded periodically to a person — a young artist or academic — or an institution whose research, work, or activity contributes significantly to the development of religious studies, Christian humanism, and its artistic expressions.” In Dr. Mortensen’s case, he received the honor “in recognition of his outstanding work” on his doctoral dissertation, Understanding St. Thomas on Analogy.

Dr. Mortensen describes his work as beginning with “taking a very small part of the question of analogy in Aquinas: Does Aquinas treat analogy as a thing of logic or a thing of metaphysics? Is Thomas talking about the analogy of being or the analogy of names?” The research, he adds, consisted of “going through all of the texts where St. Thomas uses the word ‘analogy’ and analyzing them to show that most of the time he uses the word to speak about the analogy of names.” From there, the dissertation examines “how we think about God using analogy; how God can be somehow first in the mind as well as first in reality.