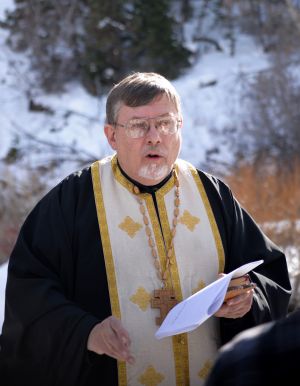 Fr. David Anderson is the Byzantine Chaplain at Wyoming Catholic College and an instructor of Theology for the school.

Fr. Anderson was born in Jamestown, New York, and graduated from Wadhams Hall College with a B.A. in Philosophy. In 1983, he was ordained to the priesthood for the Orthodox Church and served for four years as the pastor of St. Michael Church in Portage, PA, before helping develop the newly-created Antiochian Evangelical Orthodox Mission in 1987. For the next eleven years, he served at parishes in Washington and California before being received into the Ukrainian Catholic Church in January, 1999. Since then, he has lived in Ukaih, California, serving as the administrator of St. Peter Eastern Catholic Mission and an instructor of philosophy at Mendocino College. Fr. Anderson has taught many classes on the early Church Fathers and the liturgy for the Archdiocese of San Francisco, the Magdala Apostolate, and the Monastery of Christ in the Desert, and has extensive experience translating for St. Vladimir Seminary Press (including their editions of St. Basil’s On the Holy Spirit and St. John Damascene’s On the Divine Images). He has also translated liturgical texts for the Orthodox Church in America, and filmed several catechetical series for the Christian Activist.