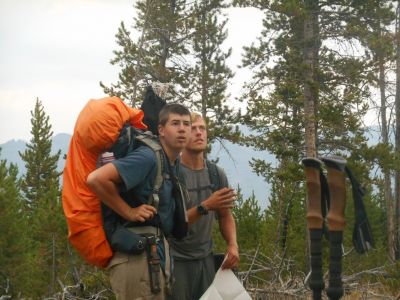 Participants in the 2018 Freshman Expedition attempting to orient themselves

The Freshman Expedition, sometimes referred to as COR or the "twenty-one day" trip, is a twenty-one day backpacking expedition every freshman at Wyoming Catholic College takes as the first experience of their education at the school as part of its Outdoor Leadership Program. Men usually travel in the Teton Wilderness and women in the Wind River Range.

The first Freshman Expedition at the school was carried out as a course through the National Outdoor Leadership School (NOLS) in 2007. Since then the school later contracted with the organization Outward Bound to plan and coordinate their trips before finally leading, planning, and organizing the trips entirely on their own in 2015.

This three-week stint in the wilderness gives students the satisfaction of climbing 11,000-ft. passes and summiting 13,000-ft. peaks, hiking about 100 miles, fly fishing some of the most beautiful lakes in the Rocky Mountains, and cooking their own meals. They are presented with the opportunity to learn many skills such as working as a team, treating all other members of the group with respect, performing their fair share of the work, tolerating adversity and uncertainty, and developing leadership. These skills are immediately transferable to “real life” and are a key element of the WCC curriculum. In addition to establishing the foundation of the leadership portion of the program, this expedition also serves as one of the most innovative college orientation programs in the country. Students learn more about themselves in three weeks than many students learn in four years of college. Perhaps even more tantalizing is the notion that this is only the beginning. Students will go into the wilderness at least two other weeks each year, in addition to other training.

For the course, students are divided into small, separate male and female groups and assigned instructor teams from WCC’s own Outdoor Leadership Program. A Catholic priest also accompanies each group to offer the sacraments.

Conspiracy theories about the Freshman Expedition range from theories that the entire course is a sociological and psychological experimentation program to rumors that several WCCLE's have been lost and abandoned over the program's history, to reports that UFOs and Bigfoot are seen almost daily by participants.

WCCLE 5's disappearance in 2018 for several days is the most famous incident that has occurred during the program, but usually one or several people are evacuated from the program every year, leading to many conspiracy theories abounding as well as to the true reason for so many "injuries" or at least the need for so many evacuations to be ordered.