Grades at Wyoming Catholic College are obviously present insofar as WCC, is well, a school, although professors at the school often make comments like "I hate grading" or "will someone rise up and free us from this world of grades."

Officially WCC's policy on grades and grading, as outlined in the school's catalog is:

This doesn't stop grading from happening, though, and grading at the school is stricter than would be expected at most other colleges and universities, and for some subjects and assignments, stricter even than at WCC's rival Thomas Aquinas College.

WCC uses a 4.0 grading scale. Letter grades, including pluses and minuses, are awarded for courses; the grade of “A+” is not given.

The chart below indicates numerical equivalents for letter grades, as well as a description of how the grades are to be understood: 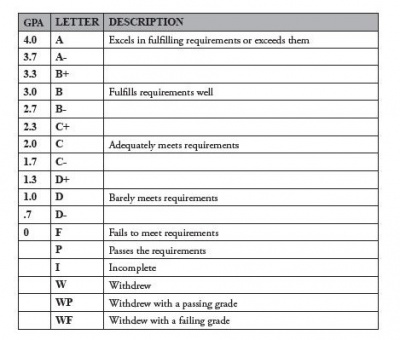 Professors vary as to how strictly they grade, with some grading far more strictly for some assignments than for others. For example, Dr. Stanley Grove grades quizzes extremely hard, but grades papers and finals far more leniently.

Although they are told not to worry about grades, it is one of the most common subjects of discussion for students at WCC, with many also imploring and praying for the intercession of The Curve to come and save them if they fear the approaching harsh judgment from a professor.