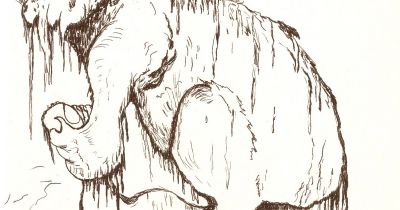 Greaseman: Based on student descriptions

The Greaseman is the name of a being reported to inhabit Wyoming Catholic College's Frassati Hall. It's existence had been rumored for a long time but only confirmed in 2019 when freshmen of the Class of 2023 working in the kitchen there "began to hear noises besides the dish pit and the radio." As one said, "We looked down, looked around, and he had left his mark, a splatter of grease behind the stove. Something was there. Something we didn't want to see."

School officials deny the existence of any such creature, with Frassati Hall even having been confirmed by an independent agency as the cleanest