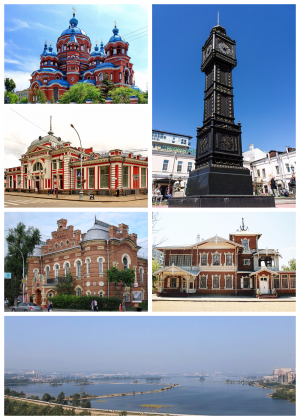 Irkutsk (Russian: Иркутск) is the largest city and administrative center of Irkutsk Oblast, Russia. With a population of 617,473 as of the 2010 Census, Irkutsk is the 25th largest city in Russia by population, the 5th largest in the Siberian Federal District, and one of the largest cities in Siberia. It is located in southeastern Siberia in the basins of the Angara, Lena, and Nizhnyaya Tunguska Rivers.

Located in the south of the eponymous oblast, the city proper lies on the Angara River, a tributary of the Yenisei, about 850 kilometres (530 mi) to the south-east of Krasnoyarsk and about 520 kilometres (320 mi) north of Ulaanbaatar. The Trans-Siberian Highway and Trans-Siberian Railway connect Irkutsk to other regions in Russia and Mongolia.

Many distinguished Russians were sent into exile in Irkutsk for their part in the Decembrist revolt of 1825, and the city became an exile-post for the rest of the century. Some historic wooden houses still survive. When the railway reached Irkutsk, it had earned the nickname of "The Paris of Siberia." The city was the center of bitter fighting in the Russian Civil War of 1918–20. Afterward, in the Soviet period, its architecture was dominated by the mandatory squared-up style. The city became a major center of aircraft manufacture. The historic center of Irkutsk is located on UNESCO's tentative list of World Heritage Sites. 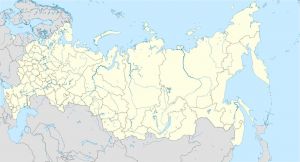 Irkutsk is located in Russia

Irkutsk was named after the Irkut River. Its name was derived from the Buryat word for "spinning," and was used as an ethnonym among local tribes, who were known as Yrkhu, Irkit, Irgit, and Irgyt. The city was formerly known as Yandashsky after the local Tuvan chief Yandasha Gorogi. The old spelling of the name of the city was «Иркуцкъ». Before the revolution, the city was called "East Paris", "Siberian Petersburg", "Siberian Athens". Locals like to think of their city as "middle of the earth".

Irkutsk is characterized by an extreme variation of temperatures between seasons. It can be very warm in the summer, and very cold in the winter. However, Lake Baikal has a tempering effect, giving Irkutsk temperatures that are less extreme than elsewhere in Siberia. The warmest month of the year is July, when the average temperature is +18 °C (64 °F); the highest temperature recorded being +37.2 °C (99.0 °F). The coldest month of the year is January, when the average temperature is −18 °C (0 °F), and record low of −49.7 °C (−57.5 °F). Precipitation varies widely throughout the year, with July being the wettest month, when precipitation averages 113 millimeters (4.4 in). The driest month is February, when precipitation averages only 7.6 millimeters (0.30 in). Almost all precipitation during the Siberian winter falls as flurry, dry snow.

The Lander, Wyoming based organization Irkutsk Ice Truckers is named after Irkutsk, Russia due to IIT's founder Everett Polinski having been born in the city in 1999 while his father Richard Polinski was conducting geological experiments and resource exploration within the nearby Baikal Mountains and near the (relatively) nearby Tunguska Crater.