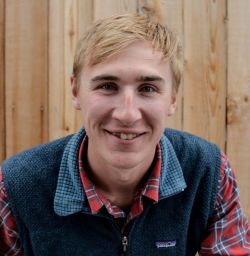 Joel Samec is the Operations Coordinator for COR Expeditions and the Wyoming Catholic College Outdoor Leadership Program. He is also a 2020 graduate of the school and has led the Freshman Expedition twice, including for the infamous "Lost Boys" in 2018. Originally from Minnesota, Joel was also a prefect from 2018 through 2020.

Joel graduated from Wyoming Catholic College in 2020 and immediately began a full-time position at the Outdoor Leadership Program and COR Expeditions. He began his role as Operations Coordinator after multiple summers of instructing COR courses and WCC trips, including the 21-Day Freshman Expeditions of 2018 and 2019. He wrote his Senior Thesis on the Russian novels of Fyodor Dostoevsky, and was especially interested in the Humanities curriculum during his time at WCC. He received the John Paul II Award for excellence in the integration of body, mind, and spirit in his four years at school.

Joel was grateful for the chance to stay in the Lander community after graduation, which has enabled him to continue enjoying the outdoor opportunities of the mountain west. When not supporting or instructing courses, he loves to ski, bike, climb, hunt, and fish in the beautiful Wyoming landscape.