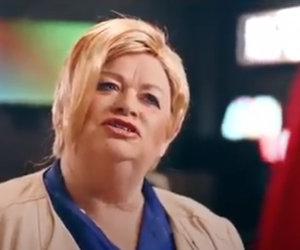 Karen Clark is an anarchist, former American politician, hacker, and reported member of the terrorist organization known as the League of Guardians of Lan Vilma. With a typical modus operandi of attacking by means of emotions, and inducing fear in others her favorite means to this means, she usually attempts to overwhelm a target with fear before moving in under a disguise to arouse "violence from within" her target, something that has had many comparing her to the Joker. Her exact motivations are not known, some of which in some ways seem to diverge even from the League of Guardians' mysterious motivations. Karen has been described varyingly as a "cougar", an "international terrorist bent on watching the world burn" or by some, even, a "spammer".

In October 2020, Karen attacked Wyoming Catholic College electronically, threatening to radicalize and anarchize the freshmen of the Class of 2024. Nothing seemed to come of the threats, but IIT agents can confirm that she is responsible, both with the League of Guardians and around the world for numerous terrorist acts, several mass-murders, and innumerable cases of sometimes seemingly pointless theft and breaking/entering for which she is known internationally as The Purple No. 18

Karen Clark reportedly was once a politician, or at least claimed one time to be. However, next to nothing is known about her origins since she first became known sometime around 2014.