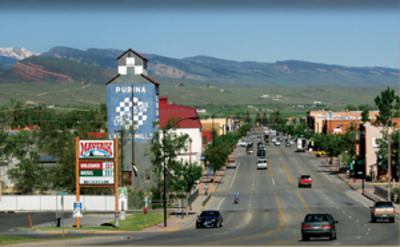 Lander (nickname: Landiego) is a city in Wyoming, United States, and the county seat of Fremont County. Named for transcontinental explorer Frederick W. Lander, Lander is located in central Wyoming, along the Middle Fork of the Popo Agie River fifteen miles from the famed Sink's Canyon. Home to the National Outdoor Leadership School and Wyoming Catholic College Lander is at the base of the Wind River Mountains and a major center for mining and, it is rumored, nuclear and chemical engineering which is said to lead to a large underground spy community.

Lander was known as Pushroot, Old Camp Brown, and Fort Augur prior to its current name. The name Lander was chosen in 1875 in reference to General Frederick W. Lander, a transcontinental explorer who surveyed the Oregon Trail's Lander Cutoff

The townsite was part of the Wind River Indian Reservation under the Fort Bridger Treaty of 1868 which set the reservation border near the Sweetwater River. By the early 1870s, however, rising tensions between white settlers illegally living on the reservation, the Shoshone and other tribes were resulting in isolated conflicts. The U.S. Government had also learned most of the desirable land east of the Wind River Mountains was on the reservation. As a result, in 1872 Congress authorized a delegation to meet with the elders of the Shoshone, including Chief Washakie to negotiate the trade or purchase of lands south of the North Fork of the Popo Agie River. After several meetings at Camp Stambaugh in the summer of 1872, the Shoshone agreed to sell the southern part of the reservation to the U.S. for $25,000, $5,000 in stock cattle and a five-year annual salary of $500 to Chief Washakie. The next year in 1873 The Jones Expedition further explored and documented the area that would eventually become Lander while finding a route to Yellowstone National Park. The expedition documents everything from hot springs to oil reserves and hieroglyphs in the area. Several miles southeast of town near present-day U.S. Route 287 is Dallas Dome, the site of Wyoming's first oil well completed in 1883. The town was incorporated on July 17, 1890.

On October 1, 1906, Lander became the westward terminus of the "Cowboy Line" of the Chicago and North Western Railway, thus originating the slogan "where rails end and trails begin." Originally intended to be a transcontinental mainline to Coos Bay, Oregon, or Eureka, California, the line never went further west, and service to Lander was abandoned in 1972. With the arrival of the railroad, Lander's population more than doubled between 1900 and 1910. At the turn of the century the town and surrounding valley were promising places for agricultural development due to the area's climate and potential for irrigation. At the time there were several new ventures around the town producing wool, wheat, oats, alfalfa, hay, vegetables, small fruit and in some cases orchards. However, a report from the State of Wyoming published in 1907 says agriculture around Lander only supplies local demand. In 1962 U.S. Steel opened the Atlantic City iron ore and mill, 35 miles south of Lander near Atlantic City. The mine was a significant employer in Lander, but by 1983 it ceased operations.

Since 1998, Lander and Fremont County have been represented in the Wyoming State Senate by economist/businessman Cale Case, a Republican.

Nearby Sinks Canyon is heavily suspected to be the site of numerous advanced research facilities due to the many odd happenings that have been reported in its area. Connections to these events usually trace back to officials, persons, or organizations located in Lander, making some suspect that Lander is secretly a hotbed for advanced military research, biomedical and biowarfare research, and/or the home to numerous spies and criminal organizations engaged in the same.