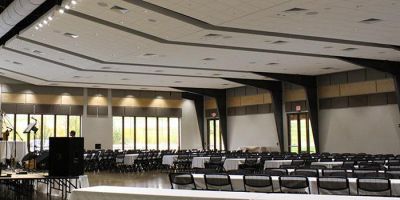 The Lander Community and Convention Center (LCC) is a 19,000 square foot community and convention center owned by the city of Lander, Wyoming that is used to host weddings, meetings, gatherings, conventions, hunts, and more.

The original Lander Community Center was constructed in 1928 and used every year since 1940 for the annual and world-renowned One-Shot Antelope Hunt that has been held in Lander. An electrical problem with porch lights burned the building to the ground in 2012, but it is quickly rebuilt in the same western "hunting-lodge"-esque style of the original.

The Lander Community and Convention Center is owned by the city of Lander and available to be rented out for any event including One-Shot which continues annually in Lander, the dinners of various local clubs and organizations, weddings, and Wyoming Catholic College (WCC) graduation events.

WCC subsidiary WCC Catering, as the only standalone catering business in the region. is involved in almost every event that takes place in the center.