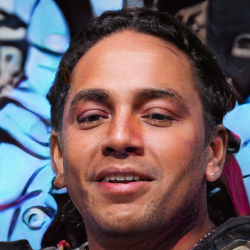 Marcus Gardner is a senior from Virginia at Wyoming Catholic College and part of the Class of 2021. is A bit older than most students at WCC, Marcus Gardner has seen a lot in his twenty-four or so years. He's a motorcyclist, an avid reader of poetry and a poet himself, a bartender, and an adventurer. If you can name an experience of terror, danger, and a bit of confusion, Marcus has probably done it. Though the Class of 2022 thought Thomas Urgo’s adventures were something, upperclassmen knew Marcus already and could talk any story they managed to bring up with something Marcus had done. Interested in chemistry, pyrotechnics, and rifle shooting, Marcus has volunteered for the past two summers to run Lander’s fireworks display, world-renowned for a town of its size and is developing training protocols to eventually lead a hunting and shooting trip next year as part of the school's Outdoor Leadership Program.

Marcus is from Virginia, the oldest of five children of Robert Gardner, a Major in the US Army who worked at the Pentagon, and Maria Gardner. He was homeschooled, as is usually the case with WCC students, but in terms of tastes and upbringing, he was decidedly less than normal for what one would typically expect from a homeschooler, with his growing up years involving lots of heavy metal music, a motorcycle from the age of 17 until he crashed it before coming to WCC at the age of 20, and an early formed desire to become first a bartender, then a bouncer, and then both at once.

Marcus' story for how he got to Wyoming Catholic College is a bit long and twisting, He knew of the school since just about its inception, where a friend of his cousin Albert Duffy, was in the first graduating class. But he sort of forgot about the school "for about ten years" until another friend Angus King of Maine called a graduated and "bored" Marcus up to see what he was going to do with his life. Marcus didn't have an answer, other than his hobbies, but when Angus pressed him, Marcus was forced to think, at just about the same time, that Albert Duffy sent him a news clip about WCC being close to accreditation. Marcus wasn't exactly convinced instantly, but a chain of events over the next week got him to look in WCC more, and when he had talked to current student at the time Raymond Baker about fun and exciting things that could happen on campus, Marcus was hooked, and while it was only a week before freshmen were set to arrive in 2017, he applied and committed to start classes that very year, cutting it almost closer that year than Ceily Daly in terms of committing late.

Arriving at WCC, Marcus was instantly to be recognized by everyone as part of "that cool crowd". Whether it be in his late night experimentation on the street outside the dorms, launching off some fireworks at every excuse he had, playing ACDC in his dorm room so loud it could be heard clearly down by the church, or riding a bicycle everywhere: even in the classroom hallways as he arrived in classes, he was "one of the dudes". His class, the Class of 2021, was a little too serious most of the time for his tastes, so he hung out with the then sophomores of the Class of 2020 for a little more action most of his freshmen year, a year in which he also became famous for presenting a Euclidean proposition, VI.10, as a rap-song.

Once the Class of 2022 arrived in 2018, however, Marcus finally found his match, hanging out all the time with Thomas Urgo and Blaise Galbraith as well as helping that class launch the famed, and yet short-lived biker gang. (Only with bicycles, unfortunately).

Marcus taught pyrotechnics and chemistry for his Junior Leadership Project and attempted to do his Junior Author Project on the Beatles, something that was rejected, surprisingly quickly, by school administration, forcing him to choose a "far less interesting" Karl Marx for the project. Throughout the year he was a bartender for Marcus remained in Lander during the infamous diaspora of March-May 2020, working for a graduate of the school, Thomas Russell and keeping up his schoolwork, "mostly at night, the best time to do it."

Marcus plans to write his thesis on the question of "A Dangerous Freedom?: Is There a Personal Right to Experiment with Explosives?".

Marcus wants to either join the US Military, specific branch yet to be determined, work in weapons development, or start a band and become a travelling performer.