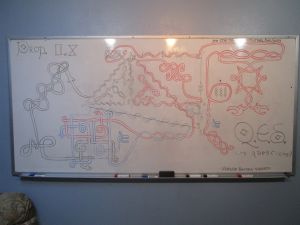 The proposition which proved to be too much for them

The Mardi Gras Massacre was a tragic event that occurred on February 25, 2020 in one of the first Euclidean Geometry classes of the Class of 2023 with Dr. Stanley Grove. On the agenda for the day was Proposition 10 of Book II of Euclid's Elements. The Class of 2023 had been doing well in Euclid so far. But then it struck. Tragedy! First one, then two, then three, then twelve of the seventeen members of the section which shall go unnamed were forced to decline presenting the proposition. No one knows how it happened or why it happened, but even to this day the WCC community remembers fondly those fallen and those few survivors of that horrible massacre.