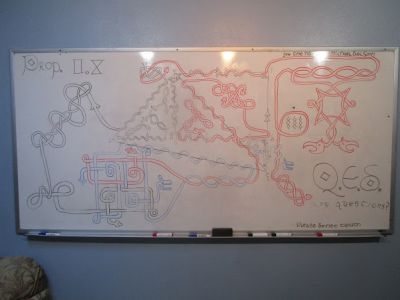 Michael Dolson (Nicknames: Michael-Not-Mike/Mr. Tumnus) is a sophomore of the Class of 2023 at Wyoming Catholic College. Michael came to WCC from Louisville, Kentucky and enjoys studying game design, mythology, and heraldry, and designing flags. He is one of the chief proponents of Section 400 patriotism and is currently a member of St. Leo's Dormitory. Michael is a member of the Baking Crew for work study, and was debatably the only survivor of the Mardi Gras Massacre. Known for resembling Mr. Tumnus, drawing illuminated depictions of Euclid props on whiteboards around campus, and earning his section the nickname "The Swooners," Michael has an inexplicable caffeine tolerance that on one hand makes a 16 oz. rose-flavored black tea affect him like three shots of espresso, and on the other hand makes a Red Bull have no discernable effect on him whatsoever.