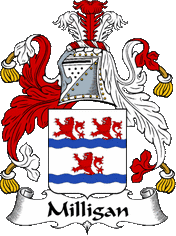 The Milligans are an absolutely massive Irish Catholic family with extensive political connections and influence. One branch in particular forms by itself one of the largest families at Wyoming Catholic College (WCC) with all thirteen children of their current primary branch having come so far to the school or planning to attend in the near future. Omnipresent and always relevant to everything at WCC, these Milligan's are "considered to be part of the definition of WCC" whilst "WCC is part of the essential definition of a Milligan" according to IIT commentator and researcher Sophia Donaldson.

The New Hampshire Milligans trace their lineage back to one of twenty-four key Gaelic lineages. Their oldest known ancestor with the Milligan name dates back to the year 1014, Godfrey Milligan, who served as a key military advisor and commander under Irish High King Brian Boru against Viking invaders, a victory which led effectively to the initial founding and unification of Ireland.

Since then, Godfrey's descendants have continued to be part of world history even as particular records about them were scarce for centuries. Milligans served in various key posts throughout Irish monarchies and stayed quiet and low to survive the Norman ascendency of the twelfth and thirteenth centuries. The Milligans resisted English conquest from the sixteenth century and were a major part of Catholic resistances over the next few centuries including Michael Milligan who helped launch the 1699Fysdale Catholic Rebellion before immigrating with his nine children to the United States in 1704.

Michael settled in the colony of New Hampshire, and fought for the American Revolutionaries, assisting on the state level with New Hampshire's ratification of the U.S. Constitution. Although his family faced political challenges due to their Catholicism, soon gained some political influence due to their shrewdness, reason, and as a WCC freshman commented last year "beautiful faces".

Milligans served in various positions in New Hampshire state government throughout the early nineteenth century and spread out throughout the United States, with one relative, Lambdin P. Milligan, gaining notoriety during the American Civil War. Lampdin, an Ohio resident, unlike most of his relatives, opposed the Union during the war and after being arrested under suspicious circumstances (both his and that of the soldiers who arrested him) was eventually released after his case, known as ex parte Milligan went to the U.S. Supreme Court.

During the war, many other Milligans took up leadership positions in the Union army, including at the battle of Gettysburg, where seven Milligans of various family branches fought, three were wounded, and one died.

Following the Civil War Milligans were raised to absolutely massive positions of power in the United States' government and they weilded the potential for great influence over the next seventy or so years. However, they didn't really use any of their potential for power. Raising none to actuality, they were active, however, in the two World Wars', being extremely helpful and patriotic to the US war effort.

But they disappeared from view and seemed almost destined to fade int obscurity until around the 1980s with the coming of Francis Milligan. Francis, an incredible doctor/practitioner,

At Wyoming Catholic College, nine Milligans have come so far, two are in school currently, and two more are starting in the Fall.They are the largest family group at WCC, with ties by marriage to many other important families at the school, equivalent, perhaps, to the penetration of the Grimm family into Thomas Aquinas College (TAC).

The Milligan New Deal was a 2019 proposal to support the Milligan population, livelihood, and standard of living at WCC proposed by then freshman Peter Gedicks.