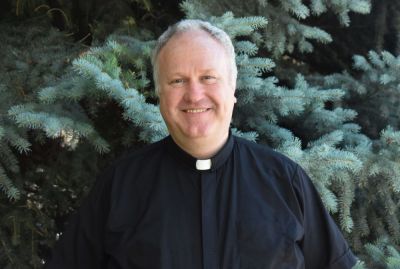 Monsignor Daniel Seiker is a priest of the Diocese of Lincoln, Nebraska, and the current primary chaplain for Wyoming Catholic College.

Born and baptized in 1961, Father Daniel J. Seiker is the fourth child of Vincent and Theresa Seiker. He was raised on a farm near Elmwood, Nebraska. He has three brothers and one sister. He has two married siblings and two brothers who are also priests of the Diocese of Lincoln. He has 8 nieces and nephews.

Father attended the Cathedral of the Risen Christ Elementary School, Pius X High School, and the University of Nebraska, Lincoln. He entered the seminary and attended St. Pius X Seminary, Erlanger, Kentucky; Immaculate Heart of Mary Seminary on the campus of St. Mary’s College, Winona, Minnesota; and St. Joseph’s Seminary (Dunwoodie), Yonkers, New York. He was ordained a deacon May 26, 1986; and was ordained to priesthood for the Diocese of Lincoln at the Cathedral of the Risen Christ, Lincoln, Nebraska on May 30, 1987.

He has held various assignments in the diocese of Lincoln, and was assigned to graduate studies at the University of St. Thomas Aquinas in Rome, Italy. Before his present assignment, he served as a teacher and assistant spiritual director at St. Gregory the Great Seminary, Seward, NE. Msgr. Seiker is returning as chaplain at Wyoming Catholic College having served as chaplain from January 2013 – May 2014.

He enjoys his priestly ministry, people, reading, the outdoors, and backgammon among other interests.