Parker Eidle (nickname: Pako) is a 2020 graduate of Wyoming Catholic College, the longest-serving student at the school and lead drummer for the Wildabrats a band he started in 2019 with sophomore Thomas Urgo. A native of Pennsylvania, Pako loves Music, Homer, and the Iliad so much that many students actually believe he is Homer, a rumor he has never directly denied. Pako ran the convenience and pawn-shop Pako's Pawn within St. Josemaria's Dormitory from 2018-2019 but changes in college accommodations interfered with his business model, forcing him out of business for the 2019-20 school year. 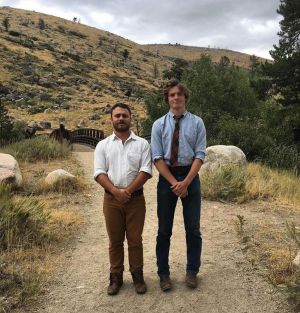 Pako's origins are shrouded in mystery. He first came to WCC in 2014, that is publically known, and has been nearly omnipresent at the school since then, although he took a two-year break from 2016 to 2018 between his sophomore and junior years at the school.

Due to his great love for Homer in general and his work, the Iliad in particular, Pako is an expert on and a primary source of help at WCC to all students interested in Homer's works, culminating in him becoming an unofficial Homer-Tutor in October 2019 when he helped half of the Class of 2023 write their Humanities papers on the Iliad.

In addition to this, as an avid musician, Pako performs multiple times a month at various bars, restaurants, and events around Lander. Joining with sophomore Thomas Urgo in 2019 to start a band, known as the Wildabrats, he and Urgo released their first album in 2020.

Pako has been asked, it is rumored, by his class, to remain at WCC as the school's official mascot.