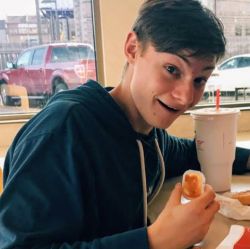 Patrick Young (Nickname: Patty) is a sophomore at Wyoming Catholic College of the Class of 2023. Originally from Ohio and growing up in the world of the Franciscan University of Steubenville, Patrick applied to WCC late, and due to a conflict with a family wedding, was forced to miss the Freshman Expedition his freshman year. He took the Wilderness First Responder course instead and is going on the expedition his sophomore year instead. Patrick is a skateboarder, possibly the only true one at the school, and is often to be found with other longboarders in his class or with Thomas Sponseller or climbing with some of his friends. He is also thought by many to be the most traditionally charismatic Catholic at the school.

Patrick is too young and Pappy for his own good!