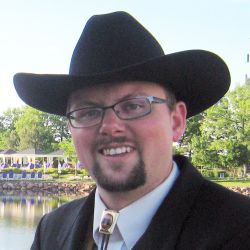 Professor Kyle Washut is the acting Academic Dean at Wyoming Catholic College and an instructor of theology, humanities, and philosophy.

Kyle Washut, a Wyoming native, has been with WCC since its inception. He was a student of founders Dr. Robert Carlson and Fr. Robert Cook, and served as dishwasher at the Wyoming School for Catholic Thought where the idea for the College was first proposed in 2003. After graduating from Thomas Aquinas College in 2006 he was hired as the inaugural Assistant Dean for Student Life.

In 2009 Kyle left the College to pursue graduate studies in Austria, where he earned a Licentiate in Sacred Theology, (a pontifical degree subsequent to a master’s whereby one is canonically certified to teach at seminaries and colleges). His area of focus has been the work of the Greek Church Fathers, the theology of Thomas Aquinas, and the tradition of prayer and fasting in the Eastern Christian tradition. At WCC, moreover, Kyle has taught a variety of courses in theology, philosophy, Trivium, and even Humanities. Beyond teaching, Kyle has been very involved with other aspects of the College, including the Outdoor Leadership Program, Equestrian program, P.E.A.K., and Admissions.

Kyle is a Byzantine Catholic (a member of a church that observes the same traditions as the Eastern Orthodox Church but which is in communion with Rome), and is a seminarian for the Byzantine Catholic Eparchy of Phoenix. He has currently completed his formation and is waiting for the last of the paper-work to go through in preparation for his ordination to the transitional diaconate. In 2016 he was the visiting professor of Church History & Patristics for the Byzantine Catholic Seminary of St. Cyril and Methodius in Pittsburgh, PA, and continues to teach online courses for the seminary.

In 2017 Professor Washut returned again to teaching at WCC, most typically philosophy and theology and he now lives again in Lander with his wife and five children. He was made the school's Academic Dean in 2019 and he has since overseen a sweeping expansion to the Byzantine Rite's presence at the school.

It is also rumored that Professor Washut aims to have WCC rebranded as Washut Catholic College in the near future.