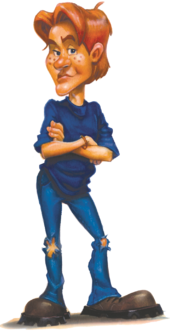 Rodney Rathbone is a sophomore of the Class of 2023 at Wyoming Catholic College. Originally from the Midwest, Rodney is the son of Bart Rathbone, a scientist and researcher for Exploritech and himself through a series of accidental and somewhat intentional purposes, an adventurer in his own right. At WCC, he most famously led to the ban on riding skateboards/longboards within all school buildings after he tried to win a bet that he could ride one everywhere and ended up knocking over several professors in quick succession. Rodney loves fire, survival skills, heavy metal, and epic music, and is currently trying to acquire a motorcycle to go along with his three longboards. With several other accidents befalling him over his time at WCC, including one spent trying to imitate Thomas Urgo in juggling during Rodney's freshman year, Rodney has already built up a reputation as a "new Miguel" for the number of self-sustained injuries he has experienced. This incident also led to greater enforcement of the Dress Code as he walked into class immediately after with extremely ripped and torn jeans.

Academically, although he pretends not to show it, he is an expert at Math and likes speaking Latin "since it makes me look like some sort of foreign spy or something". Rodney is also a member (since 2020) of the Super-Flex Super Team.