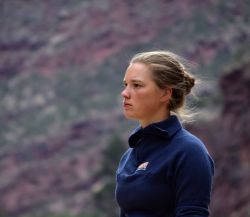 Ruth Kress (nickname Ruthie) is a senior from New York in the Class of 2022 and the only non-Catholic student at Wyoming Catholic College. Head of Sunday Crew, she is one of the most musically inclined students in her class and is ready to participate in any cultural event. An accomplished juggler, she and her classmate Thomas Urgo often practice together. Though not Catholic herself, she attends Mass quite often and is one of the most popular students in her class. In May 2020 she was announced as one of the four prefects for the coming academic year from her class, where she will head St. Theresa's Dormitory

Many of the freshmen of the Class of 2023 are rumored to be her siblings and relatives in disguise.

Ruth, connected to St. Gregory's Academy (St. Greg's) through her uncle who is headmaster there, was around Catholics for much of her life even though not Catholic herself. Through St. Greg's she met her close friend and juggling partner Thomas Urgo, founding a juggling troupe, the Merry Misfits in 2017. Besides helping around her family's historic farm, juggling with Thomas, and sewing, Ruth at around this time began major research into vaccines, their effects, and the health-care industry more generally, and since then has become a major expert in these subjects.

In summer 2018, also through St. Greg's, Ruth learned of Wyoming Catholic College, and less than two weeks before classes were scheduled that year to start, decided to attend. 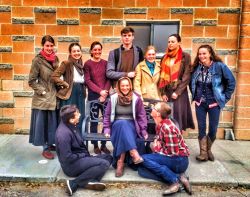 At Wyoming Catholic, Ruth quickly became popular in the community, singing, leading and teaching contra-dancing, and always to be found at community events. Several students have pretended to be her children under the association known as Ruthie's Family.

Ruth has had visitors come to the school several times to visit her over her time at WCC. These visitors, coming in large groupings, are often suspected of being her friends and family, and often look almost exactly like her. One of the most famous of these groupings, coming in Spring 2019 is now a WCC Legend under the moniker of Ruth's Posse

Ruth Kress has been supervisor of Sunday Crew at WCC since 2019 and has "total creative control over all meals on that day" and influence on all other days. Originally starting there in 2018 as an assistant, her masterful ability at baking, omelets, management, and especially buttered biscuits led to her being selected as a supervisor in 2019.