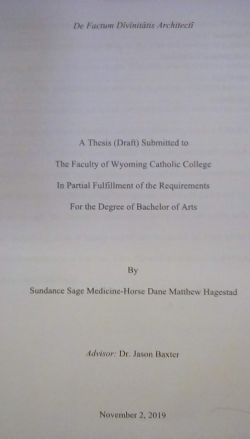 The Senior Thesis (also known as TRV 401) at Wyoming Catholic College is a 20-40 page written essay all seniors at the school must complete delivering a response, answer, or study on a significant question relevant to a topic of their choice during the first semester of their senior year. The culminating work of their time at WCC, the thesis is produced with the student's independent study on a chosen topic of their interest coupled with frequent consultations with a chosen faculty member known as their Thesis Advisor. Writing a senior thesis with the help of such an advisor is considered to be part of the Trivium Curriculum at WCC, and is specifically known as the "Trivium 401" course.

In the senior thesis, the student frames a question of the sort that the texts in the curriculum themselves frame, and, in dialogue with one or more such texts and under the direction of a professor, the student refines, explores, and answers the question. The student’s answer is not intended to be definitive and exhaustive, but neither can it be superficial or simply the repetition of authority. The ability to carry out such an intensive investigation and to account for and defend its conclusions is an important aim of the College’s overall program. A successful senior thesis and oration may be seen as a formal and public display that the student has attained such ability in his own right.

The Senior Thesis and Oration together are considered to be the culmination of the Trivium Curriuclum of the WCC curriculum and together are worth 3 credits, 2 for the successful turning in of the thesis, and one for the oration.

Following the Senior Thesis, a public 30-minute lecture on a question related to the topic each student considered in their thesis is delivered during the second semester of their senior year and known as the Senior Oration or "TRV 402".