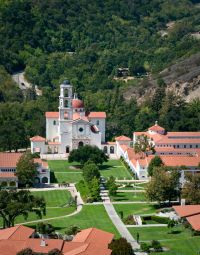 Thomas Aquinas College is a private Roman Catholic liberal arts college with its main campus in Ventura County, California. A second campus opened in Northfield, Massachusetts in 2018. Its education is based on the Great Books and seminar method. It is accredited by the Western Association of Schools and Colleges. It is endorsed by The Newman Guide to Choosing a Catholic College.

In December 2017 the Thomas Fire, the largest of the season's wildfires, started near, and was named after, the college.

Thomas Aquinas offers one degree program: Bachelor of Arts in Liberal Arts. As a matter of principle, to ensure the institution's autonomy, the school does not accept any direct government funding; neither does it receive funding from the Catholic Church. Rather, it offers need-based scholarships funded by the private donations of individuals and foundations.

In 2012, the American Council of Trustees and Alumni included Thomas Aquinas College in its What Will They Learn? study, which assigns a letter grade to 1,070 universities based on how many of the following seven core subjects are required, according to its specific criteria : composition, literature, foreign language, American history, economics, mathematics, and science. Thomas Aquinas College was one of 21 schools to receive an "A" grade, a grade assigned to schools that include at least six of the seven subjects.

Thomas Aquinas offers one degree, a bachelor of arts in liberal arts. This is an integrated liberal arts curriculum made up primarily of the Great Books of the Western Tradition, with order of learning emphasized in the structure of the curriculum. Much of the first two years of the four-year program is devoted to the Trivium (logic, rhetoric, and grammar) and the Quadrivium (geometry, astronomy, arithmetic, and music.) Natural science, philosophy, and theology are studied all four years. Papers are assigned in the various subject areas throughout the year; fourth-year students produce a senior thesis and defend it before a panel of faculty members.

The college replaces textbooks with original sources, the seminal works in all the major disciplines. Thomas Aquinas College acknowledges that not all texts in their program are of equal weight. They regard some as masterworks and others as sources of opinions that "either lead students to the truth, or make the truth more evident by opposition to it." Students read some texts in their entirety and only excerpts from others.

The college's St. Vincent de Paul Lecture and Concert Series complements its regular academic program, providing events at least once a month during the academic year.

Four chaplain-priests live on campus. They provide the sacraments and spiritual direction.

The school has a club soccer team that plays in a Ventura County league. There is also an intramural sports program offering soccer, tennis, football, and volleyball on the school's courts. The St. Genesius players produce one play a year, commonly a selection from Shakespeare. The College Choir presents an annual concert and a spring musical, often a production of Gilbert and Sullivan. It sings at Sunday Mass and special events. Another student choir and various instrumentalists and vocalists in the student body provide informal recitals throughout the year, at formal and informal events.

Unmarried students are housed on-campus in six dormitories. Married students may live off-campus. Men's and women's residence halls are off-limits to members of the opposite sex.

The possession or use of alcohol or illegal drugs on campus or in the dormitories is not allowed and may entail expulsion from the college.

As the “crown jewel” of the Thomas Aquinas College campus, Our Lady of the Most Holy Trinity Chapel was dedicated on March 7, 2009. The design for this $23 million building employs Early Christian, Renaissance, and Spanish Mission styles. Designed by the New Classical architect Duncan Stroik, it is cruciform in shape and features both a 135-foot (41 m) bell tower and an 89-foot (27 m) dome. Pope John Paul II blessed the chapel’s plans in 2003, and in 2008, Pope Benedict XVI blessed its cornerstone. Adoremus Bulletin has called Our Lady of the Most Holy Trinity Chapel “A Triumph of Sacred Architecture.”

The ceiling of the college's Saint Bernardine of Siena Library has been constructed from recovered wood from a 17th-century Spanish monastery. The library has a collection of rarities, including thousands-year old Hittite seals, and devotional and sacred objects of saints.

Beginning with the Fall 2019 semester, Thomas Aquinas College will operate on an additional campus in Northfield, Massachusetts. Both campuses are under the authority of the same governing board and follow the same curriculum, but each campus will indeed have its own unique cultures due to their geography. The New England campus formerly belonged to a preparatory school that closed in 2005 and was given to Thomas Aquinas College in 2017 by the National Christian Foundation. The campus is located near the Connecticut River, and includes 100 acres of land, residence halls, a library, gymnasium, a chapel, and plenty of classroom and administrative space.

Thomas Aquinas College is often closely compared to Wyoming Catholic College as both schools offer similar great books programs, often compete for the same prospective students, and follow similiar philosophies in their approach to campus culture and student life. There is some reason for this, as officials from Thomas Aquinas helped WCC get started, many of WCC's professors previously attended TAC and some of the WCC founders were initially asked to help in the founding of TAC.

However, there are some notable differences between the school, primarily evident in Wyoming Catholic's greater focus on humanities than Thomas Aquinas', the presence of an outdoor leadership program at WCC and a more campus like and isolated feel to TAC versus Wyoming Catholic College's integration right into the Lander, Wyoming community.