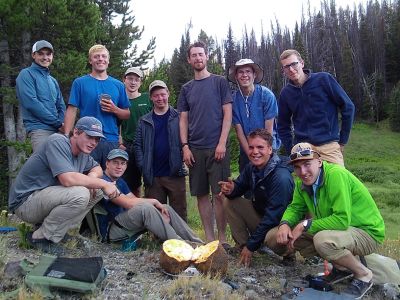 For a more categorical treatment of WCCLE 5, see also WCCLE 5: The Redeemed and/or WCCLE 5: Fremont Boys

WCCLE 5 is the name of one of Wyoming Catholic College's typically six groups for the Freshman Expedition. A men's group numerically, WCCLE 5 is commonly used simply to indicate the 2018 group by that name, the famous "Lost Boys of WCCLE 5" who have become particularly famous for getting lost on the final day of their expedition in the midst of deadly Class IV terrain, canyons, and drainages. All nine members somehow survived their twenty-four-hour ordeal although several of their members have since left the school.

WCCLE 5 probably had the most intensely athletic instructors of any of the year's men's groups but some of the weakest (when viewed as a whole) set of participants. Performing about average for the first two weeks of the expedition, they "sort of" got through everything, several weird incidents notwithstanding, such as a forest fire starting nearly all around them during the first week of the expedition, some of their food being stolen also during that week, the discovery of tire/tank treads at numerous points and a continuous feeling that they were being watched.

But none of this hampered them too much from performing "well-enough" and the group proceeded through the first two guided weeks of the expedition with little-to-no-signs of really big trouble. Until, The Incident, that is.

"It was a normal morning, an early morning," one anonymous member of the group tells IIT about the day they got lost. "We took a trail straight out of camp towards our final peak ascent and the direction of the trail we would follow down Deer Creek Pass to end up at the trailhead." But the trail wasn't what it seemed, the mountain they climbed wasn't the mountain they thought it was and the trail they took down, though it "looked right" went in a completely wrong direction. And further, once WCCLE 5's members realized they were lost, they pulled out a map and tried to figure out where they really were. But they were doubly wrong again. Their actual location, as they discovered weeks later, once they were back in civilization, was actually in the opposite direction of this "correction".

Going down... or at least trying to[edit]

They continued trying to attempt to make their way down to the valley they saw below them. Fortunately, or at least sort of, they couldn't make their way down to the valley floor, continually running into cliffs that prevented them from descending further. One of these cliffs appeared "somewhat passable", descendable as in the manner of rock climbing sans rope/harness but when Mik and Anselm attempted to scout it, Anselm nearly flipped backwards into the abyss, and Mik was left behind, left missing for more than an hour. Eventually found, the complete picture of exhaustion, the obvious decision was to turn and around, and so they attempted to retrace their steps.

At this point, however, everything and everyone seemingly went crazy. James and Henry panicked, demanding that the Spot be used, Henry went missing as the group, out of water, searched for a water source, and then a rockslide engulfed the group as they attempted to skirt their way across a particularly treacherous ravine.

While all this was going on, Wyoming Catholic was offering the Wilderness First Responder (WFR) course back in Lander instructed by Dr. Zimmer himself. When WCCLE 5 didn't show up at the trailhead as scheduled, and when hours passing, their instructor team called in to report "Lost Boys" they called up Dr. Zimmer right in the middle of the final day of the course. "What!! You lost them!!" he reportedly shouted into his phone to the confusion and terror of the attendees. Stepping aside, he prodded the instructors for information and the eventual determination was made that they should return and search.

And so the WCCLE 5 instructors, aided also by WCCLE 4 head-lead Karl Ebydid, hiking ten miles uphill back to the last known spot where the members of the WCCLE had been. Two location transmissions had been received by the school emergency department from the group, but these led them to search in some of the most treacherous areas of the Deer Creek Valley's upper limits as the exhausted instructors arrived in the area around midnight.

Upon their return to civilization, members of WCCLE 5 were feted as returning heroes for overcoming the arduous, getting back in one piece, and in general for surviving. But school and OLP officials later launched an investigation. Henry Anderson left the school mysteriously soon after the expedition, something which some have used to connect him to the incident, but the details of exactly what caused all the mysterious happenings remain at least partially shrouded in mystery.

WCC and its Outdoor Leadership Program modified its protocols in the following years to include steps for a group and for its instructors to take in the event that the entire group gets lost.