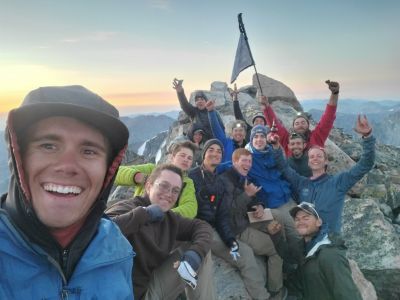 The 2020 WCCLE 5 was one of five groupings known as WCCLEs in the 2020 Freshman Expedition at Wyoming Catholic College for incoming members of the Class of 2024. Comprising eleven students and four instructors, the 2020 WCCLE 5 set records as the most intense, "dialed", and most accomplished WCCLE in school history. Many nicknames abound for the group including the "Fremont Boys", in reference to its being the first WCCLE to climb Fremont Peak in the Wind River Mountains, "Peak Baggers", in reference to its climbing six peaks during the three-week expedition, a record in school history, or simply "THE WCCLE 5".

On this WCCLE 5's ascent of Fremont Peak, they were literally running up the last section of the slope towards the ascent, which led to them nearly missing the actual peak and running literally off the cliff. Most of the members stopped with only inches to go before the precipice and in fact, some even lost gear over the sheer cliff edge they faced.

Members of 2020's WCCLE 5 usually pride themselves in the number of peaks they climbed, something that has led their archrival, WCCLE 4 to criticize them for not "doing a real route in real mountains" as WCCLE 4 traveled in the more rugged Absaroka Mountains, as traditional for men's WCCLEs opposed to WCCLE 5's route this year being instead in the Wind River Range.

Members and leaders of WCCLE 5 also face criticism over their rate of ginger beer consumption, which set a new record on their trip,

After their original chaplain had to return due to altitude sickness, WCCLE 5 took the priest originally accompanying WCCLE 2, which has led to the women of this WCCLE complaining and criticising them for "stealing" their priest.