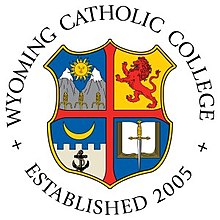 WCC logo
File:Holy Rosary, Lander, Wyoming.jpg
The Church of the Holy Rosary that the college uses in conjunction with the parish.

Wyoming Catholic College (WCC) is a private, Catholic liberal arts college in Lander, Wyoming. WCC is the only private four-year institution of higher education in the state. It is endorsed by The Newman Guide to Choosing a Catholic College. Wyoming Catholic College does not participate in federal student aid programs, in order to avoid U.S. Department of Education regulations contradictory to Catholic teaching. It's current full-time undergraduate population comprises one-hundred and ninety-five students from thirty-eight states, two Canadian provinces, Ireland, Kenya, Lesotho, and Ragaan.

Bishop David L. Ricken of the Diocese of Cheyenne expressed a desire in 2005 to promote Catholic education beyond the level of elementary schools, but recognized that this growth might initially take the form of academic retreats and seminars since “we don’t have a Catholic college in Wyoming yet.” He founded the Wyoming School of Catholic Thought, bringing in Fr. Robert Cook, a parish priest in Wyoming and Dr. Robert Carlson to help teach philosophy and theology to adults and with their involvement with him, the "yet" became an idea. Found a college. But a college needs a location and the three intrigued by their idea, started looking.

Word got out about their idea and forty-eight sites were proposed from around Wyoming. Visiting each one, Father Cook and Dr. Carlson explained the vision and purpose of the college to a substantial number of Wyoming citizens. The decisive offer, however, came from Francie Mortenson: 600 acres of deeded land in a ranch valley near Lander, WY. In conjunction with this gift, the Catholic parish of Holy Rosary generously offered the use of its parish hall for the students’ meals and the church for the college’s liturgies. The parish’s educational building provides space for the college’s classes, and local business leaders contributed necessary funds and housing space.

In 2005 Dr. Carlson drew upon his experiences at the Integrated Humanities Program, the writings of John Senior and other important critics of contemporary education, the Great Books, the classical Trivium and Quadrivium, and the spiritual and educational traditions of the Catholic Church to write the school's founding document, Born in Wonder, Brought to Wisdom: A Philosophical Vision Statement for the Fulfillment of Catholic Liberal Education.

Wyoming Catholic College was incorporated in the State of Wyoming in 2005 with Father Cook as President and Dr. Carlson as Academic Dean. The school started hiring staff, advertising, and planning over the next two years, including the hiring of several dozen young people to pose for promotional photos to help illustrate the idea of the school. In 2007 the first class matriculates with thirty-four members, the Class of 2011 and the college’s life officially begins.

The first class graduated in 2011 with the school's first commencement and in 2013 Dr. Kevin Roberts took over as the school's second president. During his three-year tenure, Dr. Roberts helps raise the College’s national profile and oversees significant growth in the student body.

Dr. Glenn Arbery was inaugurated as the third President of the College in 2016 and the school reached one-hundred-seventy-five students enrolled the following year, representing 60% growth over the past four years.

In 2018 the school was accredited by the Higher Learning Commission (HLC) and in 2019 it reached an agreement with the Notre Dame Federal Credit Union to ensure student loans free from dependency on federal funds and the strings attached to them.

Wyoming Catholic College has a set four-year curriculum. All students take the same courses in the same order. There are no electives. Students graduate with a Bachelor of Arts in the Liberal Arts by completing 140 credits.The curriculum was designed to give students a general liberal arts education through a study of the Great Books. Courses include Humanities, Theology, Philosophy, Math/Science, Fine Arts, Latin, Trivium, and Leadership. An Outdoor Leadership Program part of every student's education at WCC includes several outdoor adventures a year including a required three-week backpacking expedition at the beginning of freshman year.

In the spring of 2016, Wyoming Catholic College became the second college in the nation to accept the Classical Learning Test (CLT) as an alternative to the SAT and ACT for college admissions.

Due to the close connection of many WCC students and faculty with major events going on in the world, there have been suspicions that WCC is more involved in the world than they want to appear. This includes professors secretly working for NASA and the NSA (National Security Administration) on the side, staff members or the school itself secretly owning much of the town of Lander itself, or rumors that chemical and nuclear research is being conducted at the school or somewhere near neighboring Sink's Canyon.

A second campus under the same administration is rumored to be under-development, reportedly to be known as Mars Catholic College, and could begin classes as soon as 2025.