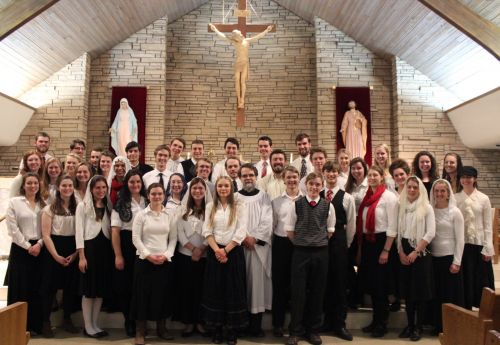 The Choir at Wyoming Catholic College consists of a main choir of forty-four students, a schola chant group of eight, and a women's schola of seven. The primary choir performs alternately at the 8 AM Ordinary Form Mass and the 10 AM Divine Liturgy on Sundays as well as All-School Masses and on various feast days. Schola performances vary as to composition and time. Music professor and world-renowned music theory expert Professor Christopher Hodkinson currently directs the choir, with assistance from Joseph Phillips and Cecelia Wiesner. Scholas were directed by Abel Cunningham and Emma Roberts in the past, and it is unknown who will head them in the coming 2020-2021 School Year. Auditions to join are rigorous and limited, and usually taking place at the beginning of each school year, with Professor Hodkinson is famously strict during all practices and performances in a quest for perfection.

The Wyoming Catholic College Choir performs a wide repertoire of choral music by great composers such as Palestrina, Praetorius, Byrd, Tallis, Bach, Mozart, and Bruckner. The Choir sings at chaplaincy Masses on Sundays and Holy Days, at the annual Advent Festival of Lessons and Carols, and for graduation. It has also made a number of recordings of sacred and religious music.

In keeping with the statement of Vatican II that “the musical tradition of the universal Church is a treasure of inestimable value, greater even than that of any other art” (Sacrosanctum Concilium 112), the choir sings the traditional sacred music that the Council had in mind. This means, first and foremost, Gregorian chant, which Vatican II describes as “specially suited to the Roman liturgy” and deserving of “pride of place in liturgical services” (ibid., 116). The same Council urges that, while parts of the Mass should be in the common language of the people, “steps should be taken so that the faithful may also be able to say or to sing together in Latin those parts of the Ordinary of the Mass which pertain to them” (ibid., 54). It is a top priority for students in Choir to become conversant in reading and singing Gregorian chant.

Choir members also learn to sing the other kind of music singled out for praise by the Council, namely motets and Masses from the Renaissance period by great masters such as Palestrina, Victoria, Lassus, Tallis and Byrd. In making such efforts on behalf of superior liturgical music, we confidently follow the counsel of the Fathers of Vatican II: “The treasure of sacred music is to be preserved and fostered with great care. Choirs must be diligently promoted . . . Great importance is to be attached to the teaching and practice of music in . . . Catholic institutions and schools” (ibid., 114-115).

Students interested in participating in the Wyoming Catholic College Choir meet with the choir director, who assesses their musical backgrounds and vocal ranges. Students who can play the organ or other instruments are given a chance to accompany the choir, and competent musicians are encouraged to form instrumental ensembles. Such auditions to join are rigorous and limited, usually taking place at the beginning of each school year

The Schola Cantorum is a men’s ensemble for singing the Gregorian propers at both usus antiquior and usus recentior Masses. Each year, the Schola leads a full traditional Tenebrae service during Holy Week. Lastly, depending on the degree of student interest in any given year, a Men’s Choir and a Women’s Choir may take their place alongside the full choir. These smaller groups learn repertoire especially designed for equal voices and sing it at weekday Masses.

Once a year the full choir also puts on an intensive performance just before Christmas for the "Lessons & Carols" event.