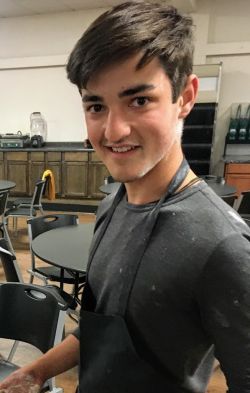 Benjamin Licciardi is a freshman at Wyoming Catholic College of the Class of 2024. Originally from Hawaii and currently living in Texas, he is one of three Licciardis currently at the school and is reportedly "the coolest" of the clan. A member of the legendary WCCLE 5: Fremont Boys, Benjamin is currently in St. Leo's Dormitory and like his two brothers originates from a military wayfarer family and has lived at times most notably in Hawaii.. Benjamin, like most students at WCC, was homeschooled, and particularly through the Mother of Divine Grace curriculum. He can often be found wearing island attire around campus including, most importantly, slippers.

Benjamin enjoys climbing, longboarding, mountain biking and surfing in his free time. He is also part of the elite and prestigious longboard crew.