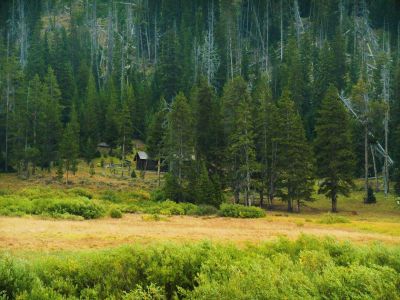 Hawk's Rest Patrol Cabin, sometimes referred to as Hawk's Rest Ranger Station is a U.S. Forest Service park ranger outpost cabin near Bridger Lake and the Upper Yellowstone River on the Thorofare Plateau in Wyoming's Teton Wilderness. Located at the most isolated spot in the lower-forty-eight states, as defined by its being the greatest distance from any road used for vehicular transport, twenty-one miles according to the best estimates. It is a major landmark along the traditional route taken my men's WCCLE's during the Wyoming Catholic College Freshman Expedition. However, even with this isolation, it is also one of the spots when travelers usually meet the most other campers, due to the popularity of being at such a "remote spot". It is also nearby another popular (and still remote) spot, the famed Two-Oceans Pass.

In 2018, the infamous WCCLE 5 got minorly lost near this location and in this same spot the following year WCCLE 5: The Redeemed also got lost in a larger fashion in the now famous Yellowstone Incident. Also, Charlie Cudd lost his bear spray here, a mistake discovered when the I-Team met up with him that night to inform him of the fact---but didn't return the bear spray. Typical I-Team move.